Nick is a wildlife professional at Oregon Fish and Wildlife
Check out his blog at Growing Hunters.com 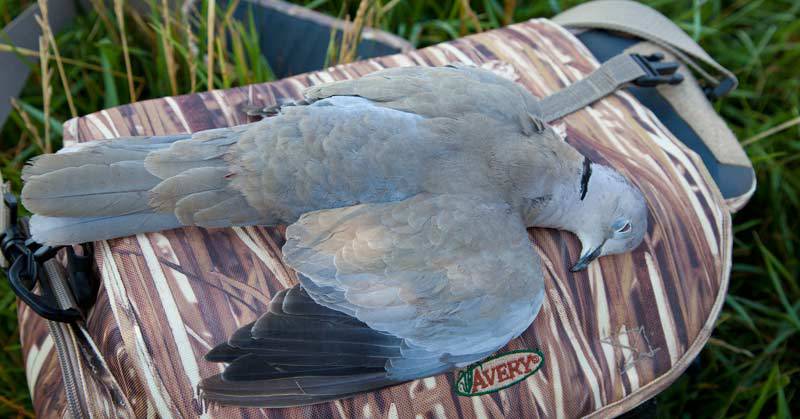 For the last month I have been pulling my hair out waiting for hunting season to arrive. Like a kid on December 24th, I have been scouting dove hunting fields, dusting off the duck decoys, cleaning my guns, looking at maps, and anxiously pacing around the house watching the calendar days slowly tick by.

Then one morning it hit me – I don’t have to wait! No more patiently waiting to hunt that perfect dove hunting field the boys and I found. Eurasian Collared dove season is open right now! In fact, it is always open in the majority of the country.

So the boys and I went on their very first Eurasian collared dove hunt – And we had a blast! 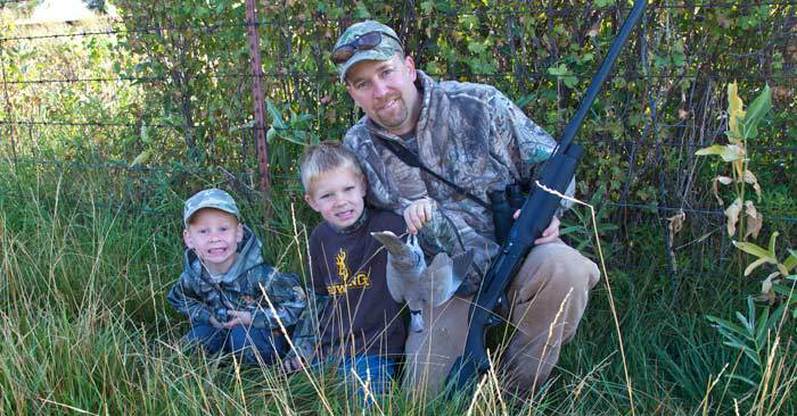 Eurasian collared doves are nearly twice the size of a mourning dove and provide an exciting, new opportunity for North American wingshooters.

Compared to the mourning dove, they are larger, lighter in color, have a rounded tail and are slower flyers. With a bit of practice, they can easily be distinguished from mourning doves while in flight. 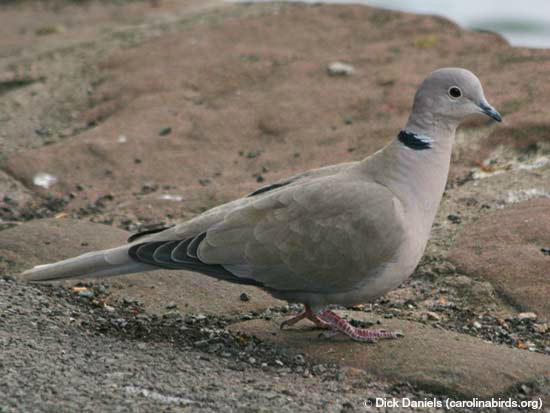 As their name suggests, collared doves are native to the Indian subcontinent. Being a strong colonizer, they had spread throughout the majority of Asia and Europe by the mid 1900′s.

They were first introduced to the Bahamas in the 1970’s when several birds escaped a pet shop during a burglary.  The owner of the store then released about 50 birds in the the area which soon established a breeding population.  They arrived in Florida in the early 1980’s and soon began to expand throughout the U.S.

By the early 2000’s their populations had spread throughout the country and they are now a common species in most states as well as Mexico and Canada.

Check out this link which shows an animated map of their population invasion in the U.S. from 1997 to 2011 – Animated Map.  Pretty incredible how fast their range and population have grown.

Being an Oregon hunter, one of the greatest things about Eurasian collared doves is I can hunt them year round and there is no bag limit.

Wondering how other states regulated hunting of this invasive species, I embarked on an online endeavor to determine each state’s regulations.  This was no easy task!  After suffering through a visit to the majority of the country’s fish and wildlife agency websites, I categorized the state’s regulations and developed the below map. 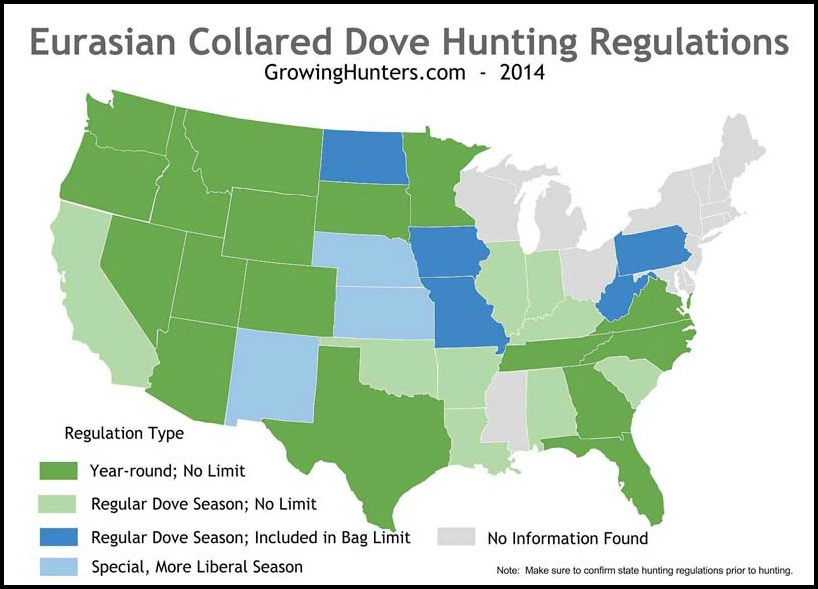 I also found that many states have regulations requiring hunters to keep a fully feathered head and wing attached to a bird in the field so game wardens can distinguish between a mourning dove and collared dove in a hunter’s bag.

Bottom line – there is a huge opportunity in the U.S. for Eurasian collared dove hunting!

When collared doves first arrived in my area a few years ago, you very rarely saw them outside of our small rural towns and neighborhoods. As their populations expanded, I eventually started seeing them associated with farm houses with large roost trees.   Now they are abundant throughout our agricultural areas.

I have found the birds to be less common in large open expanses of wheat fields that have no trees or farm buildings.  For the greatest abundance of birds, I key in on agricultural fields near the city limits of small towns or areas with abundant farmhouses and smaller grain fields.

Private land access can be easy to find.  Many farmers, landowners, and bird feeder ethusiest do not like this newly arrived species and will welcome collared dove hunting on their property.

Collared Doves – Made for Youth Hunting

Collared doves present an excellent opportunity for young hunters. They allow extended seasons and an opportunity to hunt before most hunters head to the field for the year. 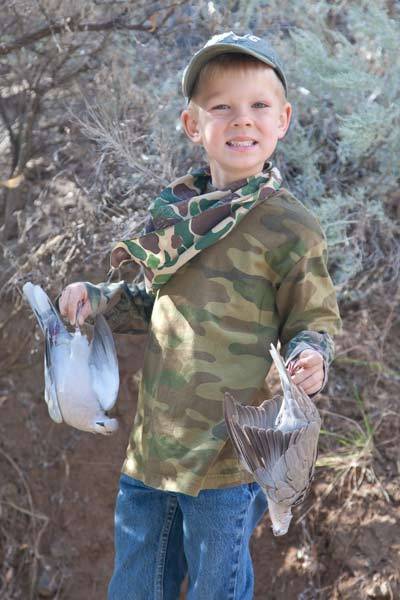 They provide a challenging, yet slower and larger target than mourning doves.  They also provide an opportunity to teach youth “on the wing” identification of species that can be a good introduction before building up to more difficult waterfowl species.

Early one mid-August morning, I woke the boys and asked them if they wanted to go Eurasian collared dove hunting. They immediately jumped out of a deep sleep and began to throw on their camo.

After suffering through the lengthy process of exiting the house with a 3 and 5-year-old, we were headed to the dove field.

Walking to the fence row we selected during our scouting, the boys were excited to see doves flushing out of the wheat that was still standing in the field. 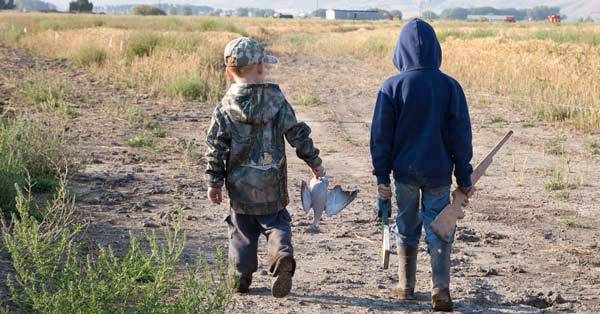 For several hours, we had mourning doves, Eurasian collared doves and pigeons whizzing past us on their way to their morning breakfast.

The pure excitement that the boys displayed every time a dove would whiz by us was intoxicating.

I must admit, dove hunting with a 3 and 5-year-old presents its challenges; particularly remaining alert for incoming birds. When not getting rocks out of boots, helping someone go pee, or digging through my pack for more food – I managed to connect with a few collared doves and the boys retrieved them for our game bag. 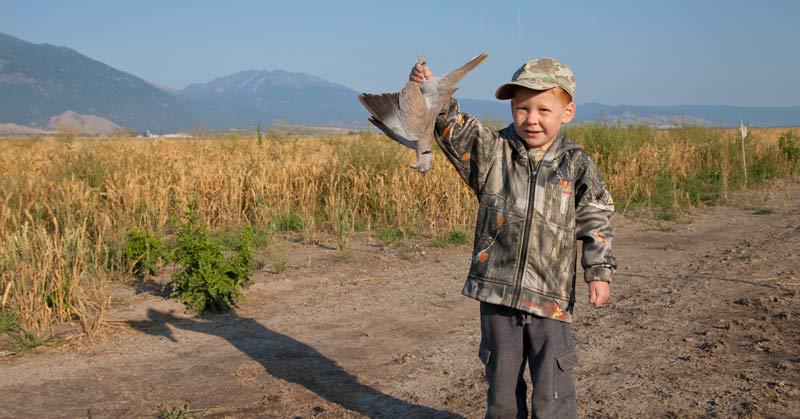 To an adult, this was just a quick pre-season hunt for a recently introduced exotic species. To two little boys, this was an adventure dreams are made of.  And to their father, it was the first of many hunting memories to come this season.