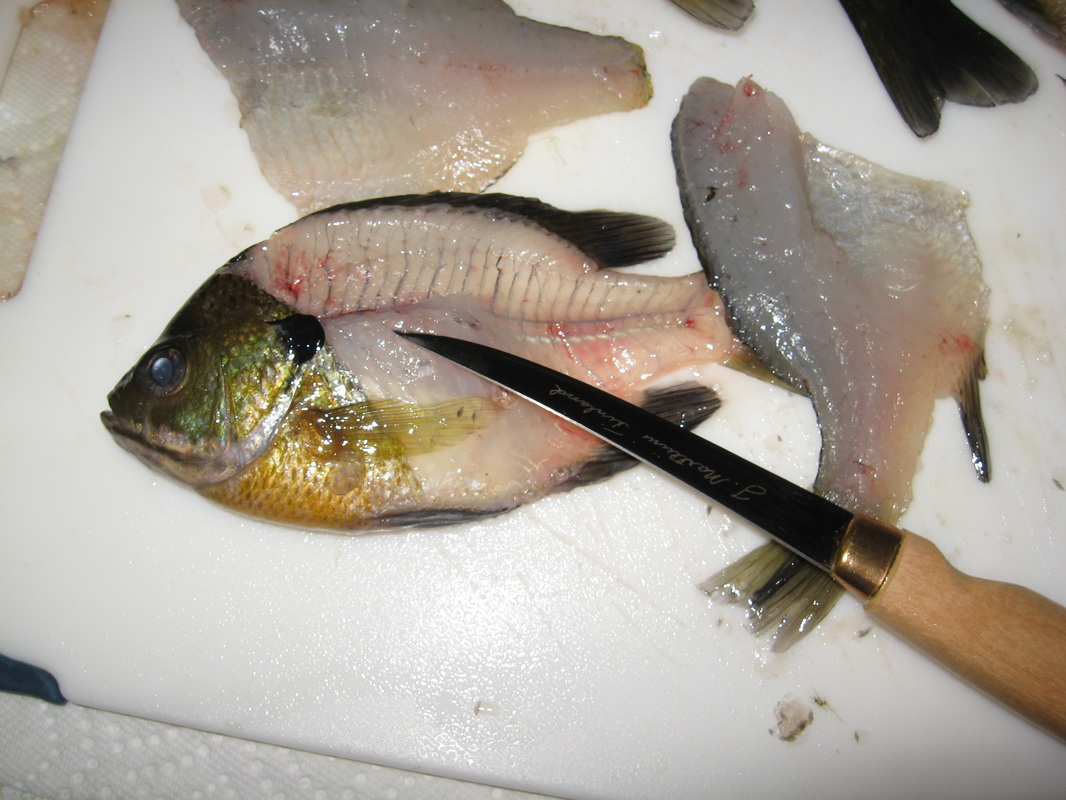 The NYS DEC promotes sport fishing for “pan fish” on its website. Pan fish is a term that refers to small fish that are considered to be good table fare. The term pan fish is indeed derived from frying pan.

Pan fish are most often associated with fish in the Lepomis genus: bluegill, pumpkinseed, red ear, warmouth, redbreast, long ear, and green sunfish.  However other fish are also considered pan fish such as crappie, perch, bullhead, warmouth, rock bass, and others.

Bluegills are the most often discussed pan fish, thus may be the most common or popular.

A three ounce serving of bluegill contains 97 calories, 2 grams of protein, 1 gram of fat, and 73 milligrams of cholesterol.

It takes eight to twelve bluegill to yield one pound of edible meat. According to Wisconsin Department of Natural resources, four 8 inch bluegills yield more meat than 25 five inch fish.  However, it takes seven years for a fish to reach eight inches and 16 years to reach nine inches. To reach five inches, fish must be four years old, and to yield one half a pound of edible meat, requires 25 four year old bluegill.

By contrast, most mourning doves, even in the absence of hunting, complete their entire life cycle, including reproduction, and live less than 12 months. Young are independent when 18 days old and both sexes are sexually mature at 85 days of age.

It only takes one or two mourning dove breasts to make a meal for one person.

The live weight of a mourning dove ranges from 3.38 ounces to 5.99 ounces. Breast muscle makes up 1/3 or more of a bird’s weight, as the breast powers the wings. The back has little mass and this also aids in flight by creating a steady center of balance. The feathers of a bird weigh more than the entire skeleton. Generally a bird’s skeleton comprises about 5% of its total weight. A dove breast yields on average about 3 ounces of meat.  A whole dressed dove yields a little more.

One average crab yields 2 ounces of meat which is 14% of Live weight.

Average live weight is about 5.3 ounces.

The retail market price of BCC is:

Blue crabs mate and spawn from spring to fall.  Male crabs tend to molt throughout their lives, while females have just the one 'terminal' or 'maturity' molt. Female crabs can mate only once during their lives (during their terminal molt when in the soft-shell stage), but store sperm for multiple spawnings. Females can produce between 750,000 and 3,200,000 eggs per brood. Small crabs molt frequently, but molting decreases in frequency as crabs grow bigger.

The male crab may cradle the female—a pose in which the two crabs are referred to as doublers—for a few days prior to her terminal molt to maturity, and may stay with her after mating while her shell hardens and to ensure another male doesn't mate with her.

And you thought mourning doves were cute….

Discussion: A frequent reverberation used to invalidate dove hunting is some variation of the statement: “doves are too much work for the amount of meat”. One method of cleaning doves is a one-step process. By contrast, cleaning Blue Claw Crabs is a nine step process to obtain two ounces of meat.

Crawfish are sold live as well as processed and their maximum shelf life is three days.

The tail or abdominal meat is most eaten; however, it is common to “suck” the meat and juices from the head and claws.

As with blue claw crabs, crawfish are also eaten when they are molting or “soft shells”.

25 pounds of whole crawfish yields four pounds of tails, of which 15% is edible meat.

“Retail Cuts” is what is found at grocery stores. This yields 30 to 50% of live weight.

“Primal Cuts” is how meat is sold to restaurants. It is major sections of animal which restaurant chef cuts into portions.

“Finished Cut Weight” is the amount of meat in retail cuts that animal yields.

Some processors only retain tenderloin and caudal region and doing so yields 25% of live weight.

Gutted fish may yield up to 83 to 90% of the live weight depending on the species and other factors.

In the case of some farm-raised fish, including tilapia, fish yielding a larger fillet convert feed less efficiently and require more sophisticated technology, which increases effluent and other byproducts as well as increasing production costs. Other farmed fish, such as channel catfish, are the opposite and yield a greater percentage as they grow because their head to body ratio changes.

Life span can exceed 20 years. Shellfish filter pollutants out of water, a single animal will filter 50 gallons a day. (And remember Life span of some species can exceed 20 years, that’s a lot of filtering)…   Most species populations are way below historical levels…

In the past, there were over a Billion shellfish off Long Island, now there are relatively few and many people and industry – no wonder the water quality is what it is.

Researchers put California floater mussels and Asian clams into a tank with treated wastewater that contained various levels of contamination. Within 72 hours, the bivalves had removed up to 80 percent of some of the contaminants from the water. 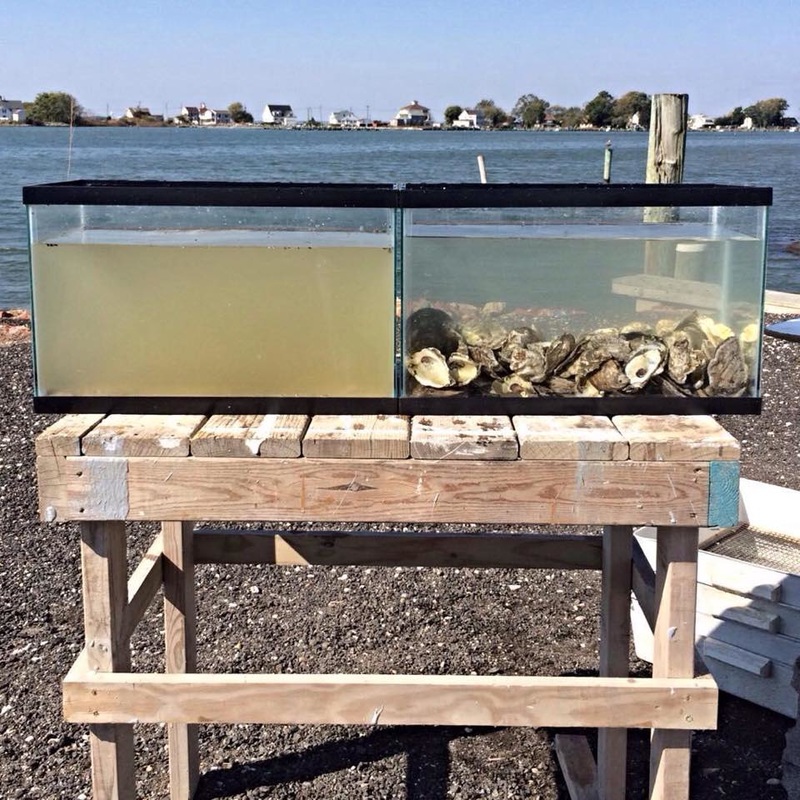 Oysters are generally an expensive food.

Fresh oysters must be alive just before consumption. Oysters must be capable of closing the shell tightly. Any open oysters should be tapped on the shell: a live oyster will close up and is safe to eat. Oysters which are open and unresponsive are dead, and must be discarded.

Opening live oysters is difficult and requires practice. An alternative to opening raw oysters before consumption is to cook them in the shell – the heat kills the oysters and they open by themselves.

NYS allows harvest of Oysters and other shellfish:   (but not mourning doves):﻿  http://www.dec.ny.gov/outdoor/29870.html 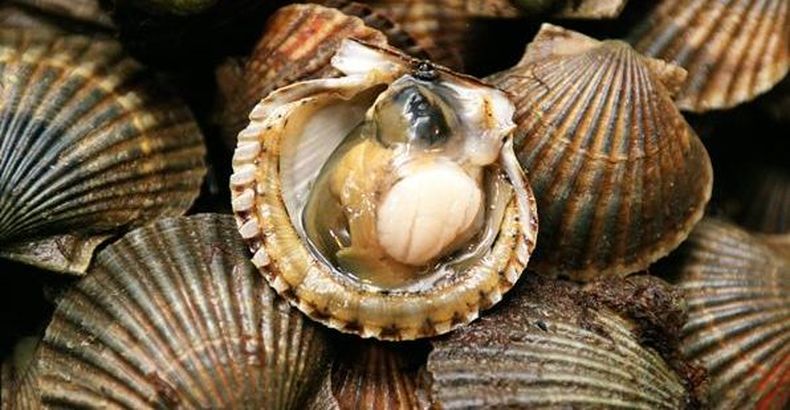 A shrimp is synonymous with being small, as we all know….

Although our shrimp fisheries are among the largest and highest valued fisheries in the United States, farm-raised imports make up the majority of our shrimp supply (1.1 billion pounds in 2013, valued at $5.3 billion). In fact, shrimp imports make up nearly 30 percent of all seafood we import (in value). We mainly import shrimp from Southeast Asian countries, followed by Ecuador, India, and Mexico.

Shrimp is farmed in the U.S., although in relatively small quantities. These operations produce small amounts of shrimp, mostly as a heads-on product for local markets. Total U.S. shrimp aquaculture production was estimated to be approximately 5 million pounds in 2001. (U.S. Department of Commerce, 2002). In an attempt to enhance the economic viability of shrimp culture in the U.S., technology has recently been developed to allow the culture of marine shrimp in freshwater or brackish water.

The highest rates of incidental catch of non-target species as identified by Alverson et al (1994) and other workers are associated with shrimp trawling.

Per Wikipedia: The highest rates of incidental catch of non-target species are associated with tropical shrimp trawling. In 1997, the Food and Agriculture Organization of the United Nations (FAO) documented the estimated bycatch and discard levels from shrimp fisheries around the world. They found discard rates (bycatch to catch ratios) as high as 20:1 with a world average of 5.7:1.

Trawl nets in general, and shrimp trawls in particular, have been identified as sources of mortality for cetacean and finfish species. When bycatch is discarded (returned to the sea), it is often dead or dying.
﻿Sardines:

Bycatch: The round haul gear used to catch Pacific sardines is highly efficient, and has a very low rate of bycatch.

Sardines live for 15 to 25 years. By aging fish by measuring ololiths, biologists consider the average age of harvested sardines to be between three and five years old. That , however, may not be sardines which are canned but larger processed and sold in other ways. Maximum size for sardines is 6 inches and 11 ounces.

Conservation: Sardines have not been monitored and there is a recent drop in harvest, prompting managers to inventory the population and tighten harvest regulations.

Most products of canned sardines usually contain around 3.75 ounces of meat. The nutritional information is 166 calories, 9 grams of fat, 19 grams of protein, and 54 mg of cholesterol.  Whole fish or whole fish minus the head.﻿
Anchovies:

An anchovy might reach a weight of 2.4 ounces, but are canned in tins with a net weight of 2 ounces. Cans usually contain tiny fillets rather than whole or headless whole fish as sardines are canned.﻿