Evaluating the Economic Impact of a Dove Season in Michigan
Commissioned by: The Committee to Restore the Dove Shooting Ban and The Humane Society of the United States
Authored by: Donald R. Garlit and Jennifer Fearing
June 21, 2006

See bios for Garlit and Fearing

​Here is the conclusion of the authors:
Conclusion Based on our review of available information, we find no plausible evidence to support proponents’ assertion that a mourning dove season in Michigan will create million of dollars of annual economic activity through expanded tourism, increased spending and more jobs. On the contrary, we find compelling evidence that the addition of this new season will not create new economic activity of any kind – drawing no new participants to the sport, and bringing in few, if any, tourists to the state. Without such activity, there is no way that overall spending can increase or new jobs can be created. Further, to the extent that the new season brings with it both new costs and reduces the opportunities for non-hunting recreational opportunities, the State’s economy may be harmed.
Here is the two author’s rational given for this conclusion:NY Dove Hunting’s Response:
Although hunting is indeed a significant source of economic revenue and is an important funding strategy for wildlife restoration and conservation, revenue is not the only or most important benefit of hunting, including dove hunting. Additionally, the DEC administers many programs, including non-hunting programs. None of these programs are continued or discontinued because of their profitability, nor should they be.
Never the less, the focus of the report is on the economics related to dove hunting, so we will restrict our response to that topic.
Dove hunting is a form of hunting available to people with various limitations, including financial limitations.
Some people who cannot otherwise hunt, are able to participate in dove hunting, thereby increasing revenue and license sales.
Additional opportunity for existing hunters will allow for more days afield or will encourage more days afield to seek alternate game during overlapping seasons.
New dove hunters may invest in a hunting dog, and the associated costs, including dog food. Hunters may not own a shotgun suitable for dove hunting, or might seek a sub-gauge in lieu of a 12 gauge.
Although dove hunting is not equipment –intensive, there are components which are specifically made for dove hunting and useful to dove hunters. Some examples are dove belts, stools, field umbrellas, dove trees, dove decoys, dove calls, and warm weather camouflage clothing.
The authors reference $800 a year, spent on dove hunting in addition to other hunting expenses, per hunter, as not being credible. Although it is true not every hunter will spend $800 every year or any one year, this premise is shallow and does not consider other factors. Some hunters will spend much more, and others will spend much less. The majority will spend an amount in between. For an average, per hunter, per year, $800 on dove hunting alone, in addition to other hunting expenses, is a very reasonable estimate. As previously stated; the persons with less discretionary income will be enabled to hunt, or hunt more often, thereby boosting revenue even if they are outliers spending less than the average.
Most interesting is how the authors analyzed hunting license sales. The data clearly shows that on the very same year which dove seasons were reinstated in Iowa, Wisconsin, and Michigan, that small game license sales increased. The authors however, made the bogus assertion that since the long-term trend in hunting license sales was not turned around by new dove seasons; that dove hunting does not generate additional conservation revenue.
Additionally, Michigan sold 4,981 dove stamps during the first year its dove season was reinstated. This is a conservation funding strategy which is the foundation of the North American Wildlife Conservation Model, which is considered the best and most successful system in the world. Yet the author’s still trivialized this positive impact on conservation funding. 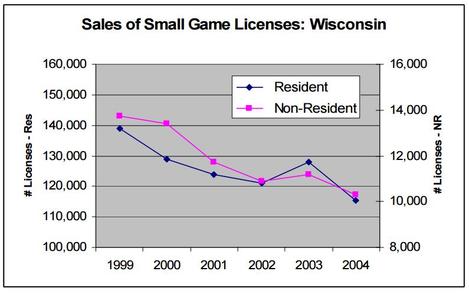 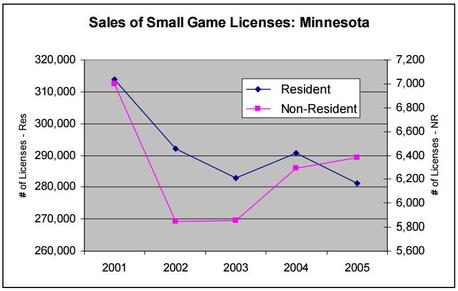 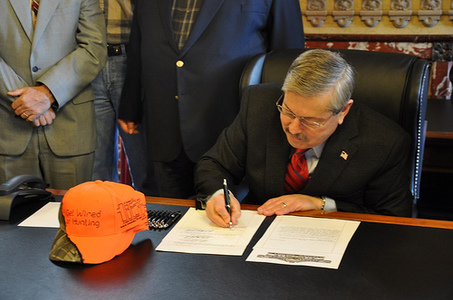 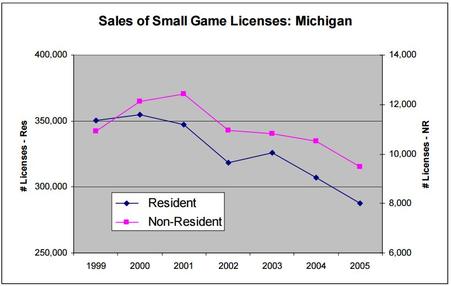 ​Michigan reinstated a dove season in 2004. Michigan did not see an increase in small game license sales during the first year of reinstating dove hunting. However, Michigan did sell 4,981 dove stamps that year.

It should be noted that in 2004 dove hunting was only allowed in 6 of Michigan’s 83 counties. All 6 counties were clustered in the southern part of the state.