The Nationwide Initiative to Ban Mourning Dove Hunting posted on the website of the HSUS states  that mourning doves are the "farmer's friend" because they reduce nuisance plants by consuming seeds.

Mourning doves certainly do consume the seeds of weeds and a lot of them. As a matter of fact, although they will eat large grain such as corn as well as sunflowers; when foraging on natural foods, they prefer the tiniest seeds. Foraging habits of doves has been studied by dissecting birds and enumerating the contents found in their crops, which is an organ located in the throat of some bird species.

Researchers have found individual birds with as much as 17,200 blue grass seeds; 7,500 croton seeds, and 6,400 foxtail grass seeds. If we multiply the continental population of mourning doves, which is about 500 million by 6,400 it certainly does seem like doves would reduce many plants! However, it is basic knowledge in the studies of plant ecology and ornithology that birds are dispersers of seed and therefore spread plants rather than reduce them as asserted by the HSUS! 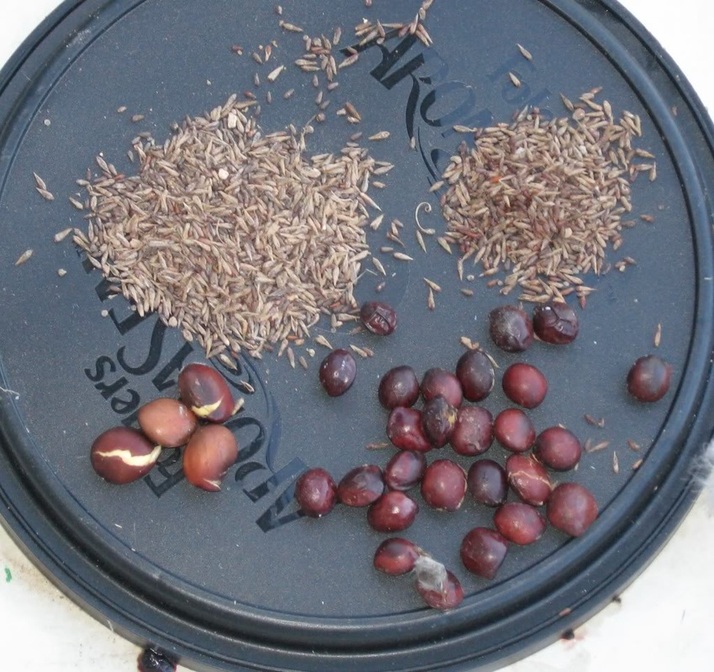 Mourning dove crop contents
Because they are so numerous, widespread, and migrate long distances; mourning doves are more significant seed dispersers than less abundant, less cosmopolitan, and/or non- migratory birds. Furthermore, unlike the fermenting digestive system of ruminants such as deer, cattle, and goats which break down much of the seeds which are eaten; seed often passes through the digestive tract of birds and in certain conditions germinate more freely than seeds that come directly from the plant.

As a matter of fact, in the 18th century the Dutch were unable to sustain a monopoly of the nutmeg trade on Amboina in the East Indies because fruit pigeons dispersed nutmeg seed to other islands.

We are not suggesting that mourning doves impact agriculture by seed dispersal. We also acknowledge that mourning doves are ground feeders and do not feed on crops until they are harvested or felled by wind or mammals such as deer and raccoons. However we want to point out that the premise of the HSUS, that mourning doves reduce nuisance plants; is erroneous and therefore should not factor into policy decisions or influence public opinion about mourning dove hunting. Whether you are a hunter or a non-hunter if your local newspaper publishes this HSUS distortion in an article or a letter from a reader; please let them know that you do not appreciate your time being wasted with erroneous information.